Have we seen the last suit-wearing Premier League-winning manager on the touchline?

Pep Guardiola and Jurgen Klopp again fought it out for the Premier League title last year, with not a smart jacket or tie in sight. Is it the end for suited football managers and title celebrations?

2022-06-21 Have we seen the last suit-wearing Premier League-winning manager on the touchline?

Pep Guardiola struck another blow for the smart casual football manager when Manchester City lifted the Premier League title last season, and it is now five seasons since the champions had a suit-wearing boss on the sidelines.

That was Antonio Conte and Chelsea in 2017 and it might be a long wait for the next one, with Conte one of only two top-flight bosses whose matchday wear is a suit (the other being Brendan Rodgers).

Prior to the 2017/18 season, the Premier League title had always been won by a team whose manager wore a suit on the sidelines.

Granted, the majority of those were Sir Alex Ferguson at Manchester United, but we also had the likes of Kenny Dalglish, Arsene Wenger, Jose Mourinho and Carlo Ancelotti among the suit-wearing bosses.

It was a blueprint Pep was keen to follow when he took over at the Etihad in 2016. The Spaniard wore a suit for the duration of a campaign which saw City finish third, 15 points behind champions Chelsea.

Guardiola addressed his team's defensive issues in the summer and it was a different Manchester City that emerged for the 2017/18 campaign, and a different Pep.

Gone was the suit, replaced at Brighton for chinos, white T-shirt and trainers. It was a blueprint that was to last the season, with a white round-necked T-shirt replacing the collared one worn at the Amex and a dark, round-necked sweater and jacket for chillier days. Dark chinos replaced the lighter ones as we entered autumn. 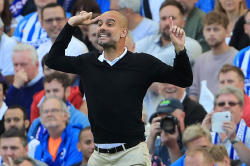 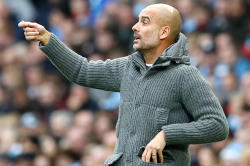 Title duly delivered, Pep got bolder in November 2018, introducing the Premier League to the 'jardigan', a woolly jacket cardigan hybrid that saw him through most of another championship-winning season.

Thankfully, it was gone for the next campaign (though a dark blue version did make a brief return in 2020).

2019/20 was then the season of the heavily pocketed trouser, first introduced as part of a dress-down-day at the office ensemble at Bournemouth.

Useful for carrying all manner of nick-nacks, they weren't so adept at picking up points, with Liverpool's Jurgen Klopp becoming the first tracksuit-wearing manager to lift the Premier League title. 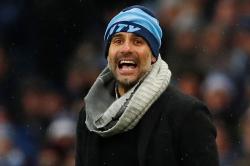 Smart casual again won the day in 2020/21 as Guardiola and City regained the title but rather like a partner who has got comfortable in their relationship and let their standards slip, so too has Pep, eschewing the chino, T-shirt, sweater uniform which has served him so well for the majority of his time at the Etihad for anything he can pick up with a staff discount at the club shop.

Man City logos now feature heavily on his clothing and it's a push to call last season's style smart casual. He'd struggle to get in a nightclub, let's put it that way, even if he is now wearing shoes.

New boys Bournemouth, Fulham and Nottingham Forest are all coming up with managers whose style is very much smart casual, though Scott Parker will surely have banished his much-maligned coat from two seasons ago to the back of his wardrobe.

Erik ten Hag is also of the smart casual persuasion, leaving Antonio Conte and Tottenham and Brendan Rodgers at Leicester to keep the flag flying for suit-wearing managers (and even Conte doesn't wear a suit for every game).

As for Pep, who has gone from wearing a suit through smart casual to club shop wear, the next stage is surely sweat pants, vest and sliders. Especially if that vest comes complete with a club logo.

A look back at eight weird and wonderful pre-season friendlies, including Bournemouth vs Real Madrid

From Muhammad Ali to Floyd Mayweather, the top 10 boxers of all-time